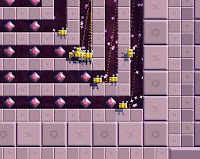 Swarm Racer is a little different than what someone might think just by looking at the screenshots. Yes it is a top-down racing game, no you don’t race a single car against 20 others. You control the entire pack. (Hence the name.) The basic idea is that you cruse up and down the eight tracks collecting shiny objects. When all the objects are collected, the track is complete. It’s a pretty simple formula.

One of the things that a stick out about this game is the backgrounds of the tracks gives them a very convex look. Details like this are what sets games apart. My only real complaint is that the game only comes with a grand total of 12 tracks (8 standard tracks an 4 custom tracks.) I was able to cruise through those fairly quickly. However, it’s pretty obvious that this was a game that took some risks and tried something unconventional.  It’s not too short considering it’s a free title. Kudos to Lexaloffle Games for releasing this for free and giving  us something different from every other game on the freeware scene.
Lexaloffle Games has also produced some acclaimed commercial indie titles. You can check out Swarm Racer, along with some cool demos here.
Posted by Critical Failure at 4:11 PM