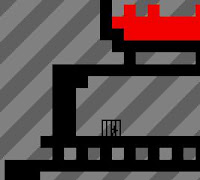 I found ‘Dear Agent’ watching Bytejacker’s “Baby Punching Hard Games” episode, so I knew it was going to be a tooth grinder. What we have here is an action themed platforming game with puzzle elements and basic retro-esque stick figure characters. Your stick figure is a secret agent who has recently awoke from sleeping in a cage by a floating face which looks a lot like Al Jolson who always begins by saying “Dear Agent” like he is a swooning high school girl spraying his government instructions with perfume. To top is all off, each message is concluded with “Hugs and Kisses”. Each stage must be carefully maneuvered with a limited amount of firepower. More often than not, the player runs out of ammo before reaching the end causing the player to have to construct a clever plan to do the most damage using the least ammo. 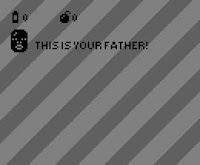 There are a few things about Dear Agent that I really like. First off, the designer went with an elongated playing field. This kind of thing reminds me of the older arcade games that did this. Also, the sprites in this game are really small, so there is plenty of room to play even with the screen being taller than it is wide. Another really great feature of this game is the lava. Lava is found in enclosed pools and you have the ability to shoot open the blocks which hold it, and thus, the lava spills over the stage in a pixilated Pompeii style. Sayonara suckers.
The game does have its drawbacks. First and foremost, the difficulty does get overwhelming pretty quick. I can’t necessarily call this a downside, because sometimes a frustratingly hard game can be fun. The difficulty of this game doesn’t stem from design glitches so this kind of thing can be taken in stride. Let’s just say this game isn’t a lying liar like “I Want To Be The Guy”.
One big problem with the game is the jump maneuver is executed by pressing the up key. I understand why they did this. There are already three command keys mapped out in the lower left side of the keyboard. I still think this cut the replay value in half for me. Also, with a game this difficult, I feel there should have been some way to continue your game later. There are infinite continues in Dear Agent, however, there is no save feature which means you must conquer the game in one sitting. Dear Agent is a fun little piece of freeware and it has been a nice game to play for a few minutes to unwind after playing Civ II for hours. On a scale of one to ten, Dear Agent gets.. a box of Kleenex. Get the game here.
Posted by Critical Failure at 12:06 PM