So Bundle-in-a-box has packaged the following games for pay-what-you-want-starting-at-a-buck. Super Tower Rush, Hacker Evolution Untold, Pixelry, and The Blackwell Series.

If you don’t already have the Blackwell Series, they are the finest point and click games I have played in recent years. These alone make this bundle worth it. 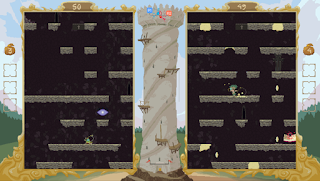 Also included is Super Tower Rush (pictured), which is a split screen platformer currently being sold on Desura. This is a really great game which I was lucky enough to pick up from IndieGameStand.com a while back on the cheap.

Go check out Bundle-in-a-box and grab one while you still can.

Brawlers are a good time. Even bad brawlers are a little fun. The worst brawler I can think of is Pit Fighter for the SNES and even that was somewhat entertaining. Combo Crew is a brawler for iOS and Android that I was lucky enough to try recently. The big draw here is that there is no on-screen controller involved. Fighting is accomplished by swiping over the enemies, and the character will run over and execute an attack. Two finger swipes execute a combo and a swipe+holding the end motion executes a charged attack.

Let Me Gush About Wizardry For a Moment

Man what a morning! GOG.com has been one of my regular stops on the webbernet for a while.  This morning while I was popping in to see if there were any flash sales, I saw that they added Wizardry 6, 7, and 8 to their catalog. I have been really hoping for a while for Wizardry to be available again somewhere so I’m pretty psyched to play those again. So having seen that, I’m going to gush about
Wizardry a bit.

So the first package they have on sale contains Wizardry 6: Bane of the Cosmic Forge, and Wizardry 7: Crusaders of the Dark Savant. I never got to play Bane of the Cosmic Forge, but I did find it complete in box at the used book store about 15 years ago for two bucks. The disks didn’t work but I held onto the box for a long time simply because
Read more »
Posted by Critical Failure at 12:22 PM No comments:

I don't usually pay that much attention to Kickstarters, but here is one that I really believe is worth it. Take a look.

Check out the Kickstarter page here.

Posted by Critical Failure at 11:38 AM No comments:

You guys know I'm a sucker for a good teaser trailer. Who wants some Wang?

Posted by Critical Failure at 12:39 AM No comments:

Cendoo Opens a Box of Junk I Send Him


His website is It's Tail Time
Posted by Critical Failure at 9:45 AM No comments:

Saw this while on vacation. They could never duplicate the impact of the older Wolf games, but it still looks like it could be a fun game.

Posted by Critical Failure at 1:56 PM No comments: