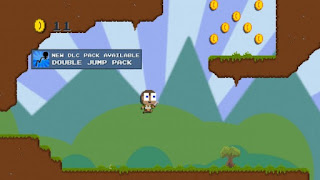 Most gamers are sick of getting nickel and dimed by the DLC business model that game companies have taken on.  Going Loud Studios made a little indie side-scroller entitled “DLC Quest” which is silly in nature, but captures perfectly the level of greed on the part of developers.
The plot is simple. The princess has been captured. Time to do what heroes do and go rescue her fat lazy ass. The game plays like an old platformer. Essentially the player needs to collect coins to purchase items which open the map up and lead the hero to the next area. DLC is purchased with the coins you find and it ranges from “The ability to move to the left” to the “zombie pack” (which makes zombies roam the background which do nothing), and so on.

This is a one sitting purchase. It’s definitely a game designed to make a statement about current events rather than to be a timeless classic. That aside, it is pretty fun to play, although it is really easy.  The sound track is a solid chiptune score from Ozzed. The game sells for 1.99 on Desura for Windows or 80 Microsoft points for the X-Box 360.
Posted by Critical Failure at 10:42 PM